Art by Bilquis Evely from issue 1 of Shaft, © 2014 Dynamite Entertainment. 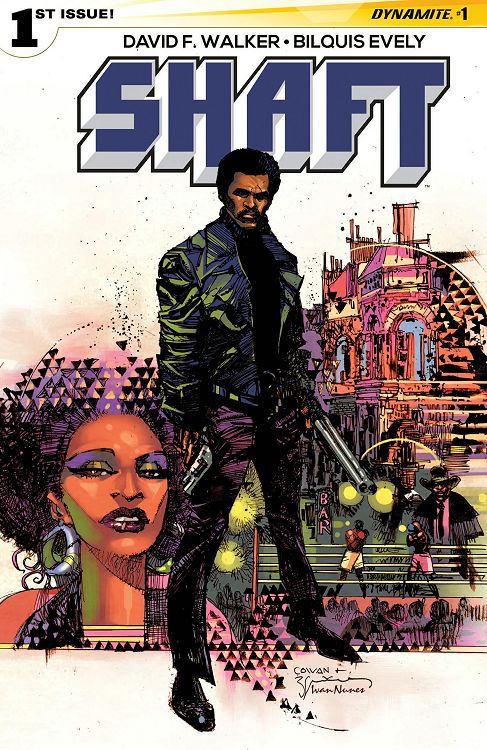 In late 2014 Dynamite Entertainment began publishing a licensed Shaft comic book. Leave your expectations at the door because, for one thing, the comic isn’t set in the same continuity as the movies and TV show — it’s a prequel to the original novels by Ernest Tidyman. And for another thing, it's one of the finest comic books currently being published. Both writing and art are virtuoso performances.

It's probably not blaxploitation, either. The comic prioritises depth over attitude. The four issues to date are written and drawn in a realistic style.

"...the character in the books is just more interesting than the one in the films. There is almost no back-story for John Shaft in the films... I’m really exploring who the man is that we saw step out of the subway and strut his way through the streets of New York. Trust me, that guy is really interesting. He grew up in the streets of Harlem, was a gang warlord, joined the Marines at seventeen, did three tours of duty in Vietnam, and came back a very damaged and dangerous man. None of that is in the movies, and yet all of that is more interesting than a leather suit." (From an interview by Comics Alliance — the full text is linked below.)

Walker is the guy behind BadAzz MoFo, a magazine and website about “pop culture at its baddest,” and the Blaxploitation documentary Macked, Hammered, Slaughtered & Shafted. He has a history of commentary on "the African American image in film and popular culture".

You can find the comic in specialty comicbook stores, or on Amazon; or buy digital copies direct from the publisher: Dynamite Digital's Shaft comics