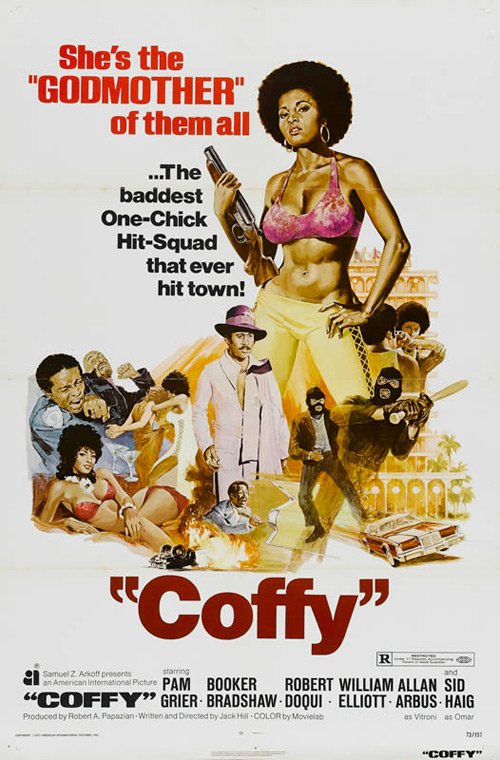 Shaft is frequently cited as an example of BLAXPLOITATION, a film genre that enjoyed popularity from about 1971-1976.

There's some uncertainty about exactly what the term "blaxploitation" implies. Does it refer to the film industry beginning to commercially exploit the African-American community's desire for movies that demonstrated (in whatever manner) empowerment? Or was it simply a buzzword coined to categorise trashy movies — “exploitation movies” — which had black themes?

How is the genre identified?

“These films were set in the contemporary urban milieu, they romanticized the iconography of the black ghetto — its subcultural styles in dress, speech, behaviour and attitudes — and glorified the ghetto as a kind of noble jungle. The films often contained a lot of sex and violence, and their heroes were invariably shown coming out on top in confrontations with the white establishment.”

That's from The Oxford History of World Cinema¹, page 505. It seems like a good ballpark definition — although if applied strictly, it'd mean The Mack (1973) isn't blaxploitation.²

20 Inches of Shaft is more about enjoying movies than analysing them. So here's a translation for modern-day aficionados: cool black heroes, mainly black supporting cast and setting, action, car chases, funky clothes, pimps and hos, slang, attitude. From the contemporary perspective, this genre is the epitome of retro-cool. The appeal is obvious.

Additionally, some of the value of blaxploitation lies in its reverse prejudice. After a century of oppression, there's a kind of justice in such films as Dr Black, Mr Hyde (1976), also known as "Dr Black and Mr White", in which, if I may quote Leonard Maltin³, "Black lab scientist [Bernie] Casey tests experimental serum on himself and turns into a white monster."

Other writers have examined the subject of blaxploitation more extensively than I can. Read these excellent articles:

FOOTNOTES:
1. Geoffrey Nowell-Smith (editor), The Oxford History of World Cinema, Oxford University Press USA, February 1999. The quote was discovered at http://www.amused.nl/film/lib/genre/blax/boek_en.html (website now defunct).
2. The Mack's ghetto is neither glorified nor noble, and superpimp Goldie sure doesn't come out on top.
3. Leonard Maltin, Leonard Maltin's 2014 Movie Guide, Penguin Books, 2013. The quoted passage didn't change between 1997 and 2014, so it's probably the same in this year's guidebook too. 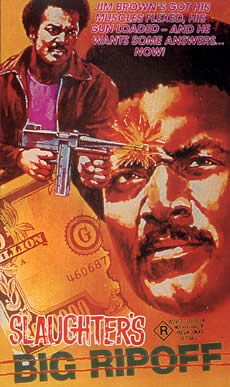 Following the success of Shaft, an innovative new movie hit the cinemas in 1972. Called Slaughter, it starred Jim Brown as a supercool black private eye who was smooth with the ladies.

Following the Shaft sequel Shaft's Big Score!, Slaughter's next adventure was called Slaughter's Big Ripoff. It was a blatant title that probably said more than the film's producers intended.

But Big Ripoff, despite its derivative nature, was an enjoyable blaxploitation flick, with a cool lead actor, and a memorable pimp, Joe Creole (played by Dick Anthony Williams from The Mack). US television celebrity Ed McMahon played against type as the sleazy (white) villain. 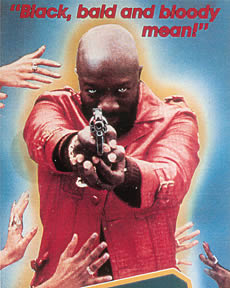 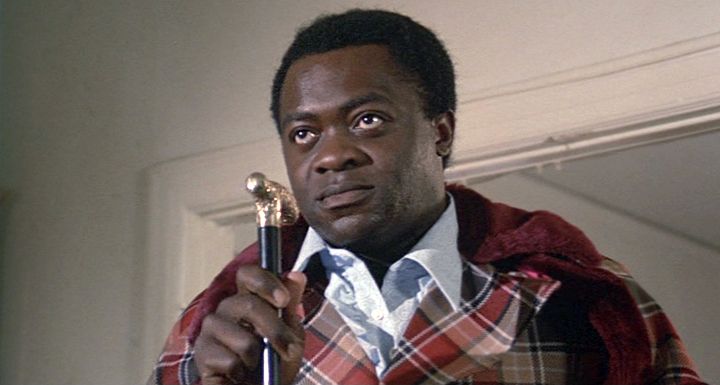 Although it's an awesome film in its own right, Truck Turner is probably most notable for being the only movie to star Isaac Hayes. Isaac, the soul singer who composed the brilliant soundtrack for Shaft, is now better known as the voice of Chef on South Park. As Turner, he made a big, scary, cool action hero.

The movie's pluses go on and on: the greatest number of pimps, hos, and pimpmobiles I've seen in any one movie; the most outrageous pimp in a serious blaxploitation (Harvard Blue is only eclipsed by the caricature Flyguy — see I'm Gonna Git You Sucka! below); memorable lines; cool clothes; a cat; great car chases, shootouts, etc. Also known as Black Bullet, in Australia and some other countries. Go watch it now!

Disclaimer: Your appreciation of the cat may be less than mine.

You're about halfway down this page. 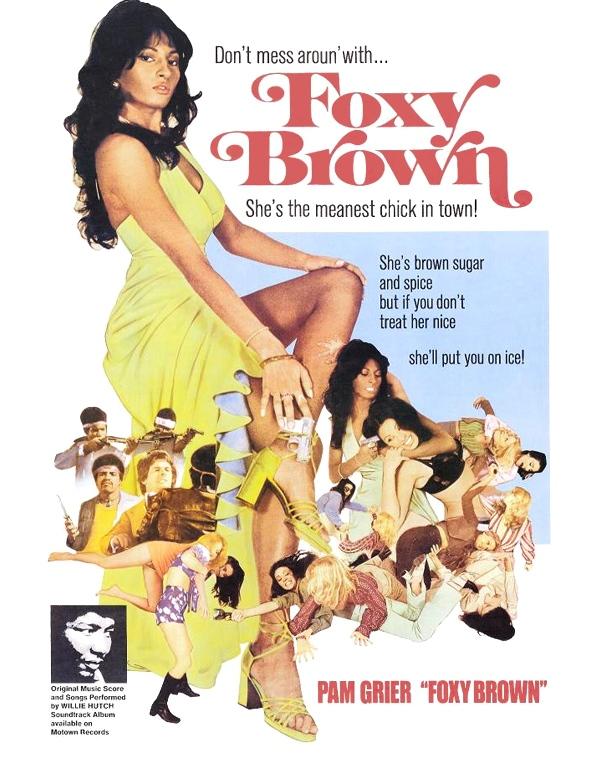 ABOVE: Foxy Brown poster. Scroll down to compare this with a retro variant poster for Jackie Brown (1997).

This wasn't Pam Grier's first blaxploitation movie — that was Black Mama, White Mama (1972) — but it's probably the one she's best remembered for. After the success of her starring vehicle Coffy (1973), a sequel was proposed, but the project eventually became the unrelated Foxy Brown.

Foxy Brown is a fast-moving revenge thriller. The film and its heroine are often surprisingly violent and sadistic, even by genre standards.

Having played two of the strongest female roles in the genre, Pam Grier was more-or-less regarded as its leading lady. She starred in several other genre films; for example Sheba, Baby (1975) and the comicstrip adaptation Friday Foster (1975) with Yaphet Kotto. She went on to appear in the blaxploitation veterans' reunion Original Gangstas (1996); in Quentin Tarantino's Jackie Brown (see below); and in Isaac Julien's 2002 documentary Baadasssss Cinema. Modern day audiences might know her best as Kit Porter in the television drama The L Word.

Fans of schlock cinema will spot Sid Haig, who played the evil clown Captain Spaulding in horror films The Devil's Rejects (2005) and House Of 1,000 Corpses (2003). Haig appeared with Grier in the blaxploitation films Coffy and Black Mama, White Mama, and even in Jackie Brown (see below).

ABOVE: The retro version of the Jackie Brown movie poster. It pays tribute to the Coffy poster at top of this page.

Jackie Brown, Quentin Tarantino's adaptation of Elmore Leonard's novel Rum Punch, is even more enjoyable when you view it as a latterday blaxploitation movie. In addition, it's peppered with references — apart from title actress Pam Grier, the title itself is a reference to Foxy Brown, rendered in the same typeface; the bail bondsman is a staple of the genre; Sid Haig, as noted above; and so on. 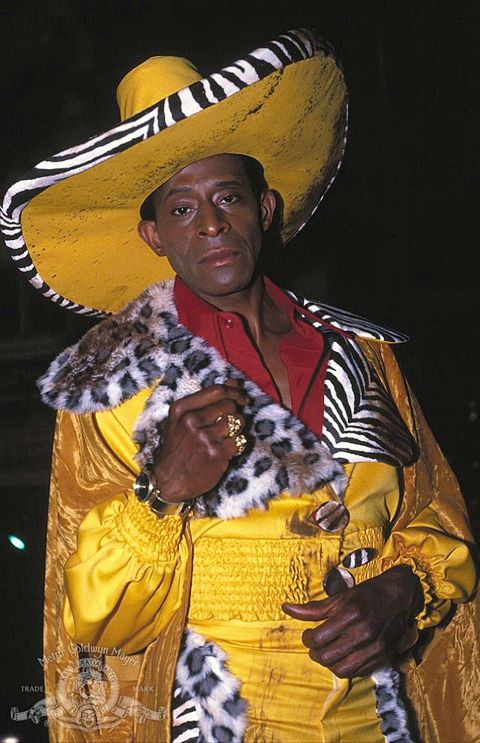 ABOVE: Antonio Fargas as Flyguy.

Written by and starring Keenen Ivory Wayans, I'm Gonna Git You Sucka! was a spoof of, and tribute to, blaxploitation movies.

Antonio Fargas — Foxy Brown, Cleopatra Jones, and Huggy Bear from the 70s cop show Starsky & Hutch — played Flyguy, a classic pimp whose outrageous costume included platform shoes with live goldfish in the heels. The Pimp Of The Year competition, which Flyguy won with a recital of his poem "My Bitch Better Have My Money", was a treat.

Not a great movie, but well worth a look. A must-see if you dig blaxploitation. 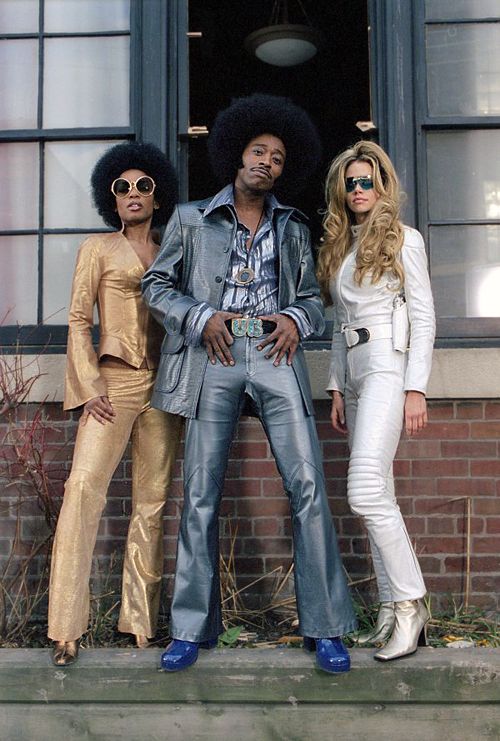 Not nearly as dumb as it looked, the clever and warm-hearted Undercover Brother evenhandedly poked fun at black and white stereotypes, as well as riffing off of blaxploitation. Eddie Griffin starred as the title character, with Dave Chapelle, James Brown and Billy Dee Williams.

A cameo appearance from blaxploitation hero Jim Kelly (Black Belt Jones, 1974) ended up on the cutting room floor; it's in the DVD's deleted scenes. 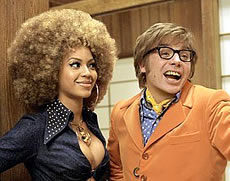 ABOVE: Beyoncé Knowles and Mike Myers.

As if in response to some unspoken wish of mine, the third Austin Powers film, Goldmember, incorporated blaxploitation. Beyoncé Knowles' character Foxxxy Cleopatra was a giant-afroed badgirl tribute to both Foxy Brown and Cleopatra Jones. Austin himself sported a purple-hatted pimp outfit that surely deserves a mention in the pimp hall of fame.

Oddly, no vintage blaxploitation actors made cameo appearances, for which the movie loses points. 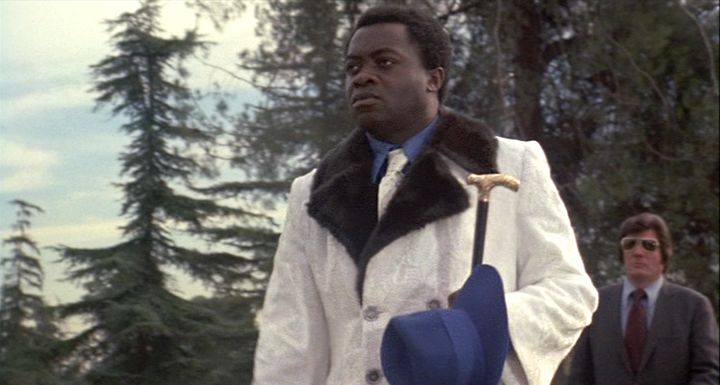 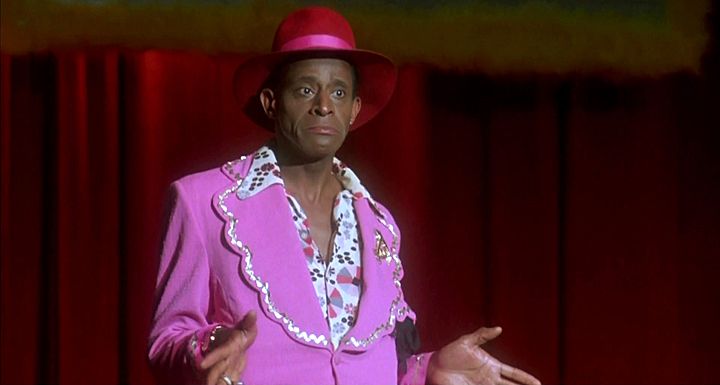 What's a blaxploitation movie without a pimp? These essential characters are identified by their sleazy misogynist attitudes, ridiculous costumes, outlandish cars, jive talk, and silly names. Some of the best are rated here.

Mobile device users might need to zoom in to read the table. Try landscape.

NOTE: Table may contain inaccuracies, depending on how much research I could be bothered doing.