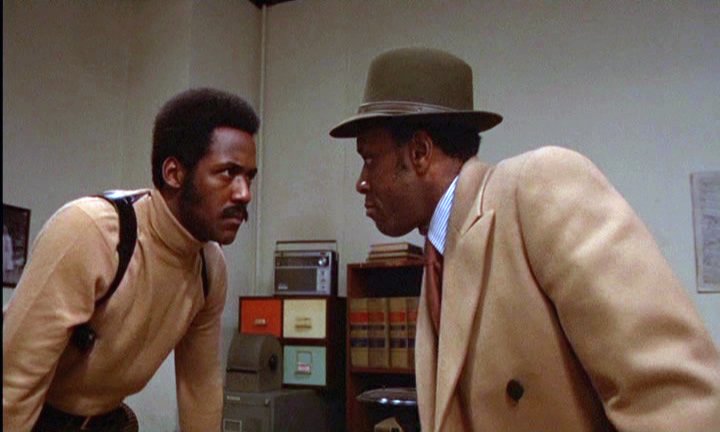 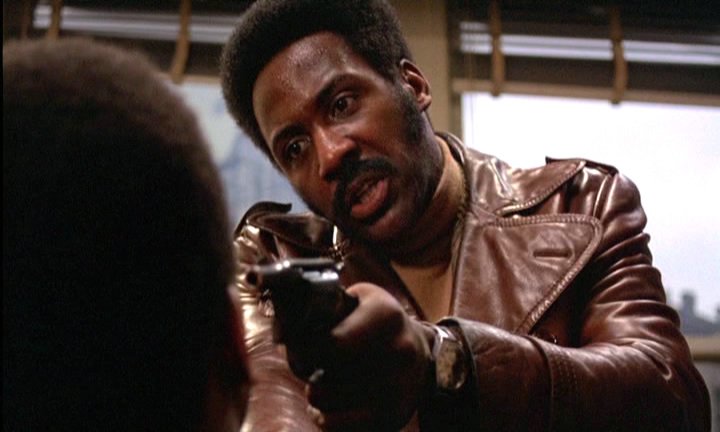 TOP: An unwelcome visit from respectable businessman Bumpy Jonas.
BOTTOM: Shaft holds a cat at gunpoint. (Not an actual cat.)

What is Shaft? In trying to describe the movie, I'm almost certain to damn it with faint praise.

Every so often an unpretentious action movie transcends its genre by simply being really well made. Shaft is such a movie. It's the attitude, the clothes, the language, the style, the characters, the dialogue, the direction, the cinematography, the soundtrack.

Shaft isn't deeply moving, it doesn't comment on the human condition, it isn't an epic movie... but it sure is cool. A suitable analogy could be Star Wars (1977): not an epic, nor an artistic statement, but a quintessentially cool deal that somehow struck a chord, made a genre respectable, and spawned a wave of imitators (all of whom missed the point).

And what about Shaft, the character? How cool is John Shaft? So cool that his nephew had to be played by Samuel L. Jackson, and that character still wasn't as cool as John Shaft.

In 2000 Shaft was added to the United States National Film Registry, a repository of movies deemed "culturally, historically or aesthetically significant".

In over-analysis we risk reducing Shaft, as well as making this a boring website, so let's leave it there... can you dig it?

ABOVE: The man in the middle is Captain Bollin, played by Julius Harris. In addition to other blaxploitation roles, Harris played bad guy Tee Hee in the James Bond film Live And Let Die (1973). For an examination of blaxploitation's influence on Live And Let Die, read Chris Norton's excellent article "Cleopatra Jones: 007" (click here).

The sequel to Shaft is inferior, but still works as a cool-ass action movie. To say that it's not the equal of Shaft isn't exactly a damning criticism.

The plot is deception upon deception — even Shaft himself gets in on the act. Somehow, though, the script is hokier than that of the original. The set pieces aren't as impressive, and the acting is generally wanting. On the other hand, there's a lot of attitude there, and once again the cinematography sets it above many of its contemporaries.

The movie ends with an extended multi-vehicle chase that seems to have no point other than spectacle; perhaps that's a metaphor for the whole film.

But Bumpy and Willy are in it again — what more do you need to know?

TOP: Shaft has a nude stickfight with a guy. Yeah.
MIDDLE: Shaft and Aleme (Vonetta McGee) in NY.
BOTTOM: Shaft and Kopo (Thomas Baptiste). In Africa.

The third movie in the series is fun, but it’s not even close to the flavour of Shaft’s Big Score!, never mind the original.

Whereas the original was new and distinctive, very much about an angry black hero in the urban New York of a particular era, this plays like a James Bond story where Bond happens to be black. (Mind you, it’s still superior to the Bond movies of its day.) What’s more, in contrast to the previous two Shaft films which are cinematic in visuals, script and soundtrack, Shaft in Africa plays like a telemovie.

With no input from Shaft's creator Ernest Tidyman, the script is written by series producer Stirling Silliphant. It’s mostly unspectacular, standard action fare, in places far-fetched. For example, when his secret plan is discovered by the bad guys, Shaft goes ahead with it anyway; I can’t decide if that’s ludicrous scripting, or if it’s intended to show that Shaft is an unstoppable force. Whatever. To balance the scales, there are also a lot of the outrageous moments you’d expect from a fine blaxploitation, including plenty of sex, violence, and purple dialogue.

Richard Roundtree’s many nude scenes are gratuitous and seem exploitative — but hey, what was that genre called again? I don’t imagine many viewers would have complained about Vonetta McGee’s and Neda Arneric’s female nude scenes.

It’s worth mentioning that there’s a black character called “Wassa”, although in 1973 that wasn’t yet a catchphrase.

Shaft in Africa is a watchable action-adventure movie. Judged as a James Bond movie, it’s brilliant. Judged as a blaxploitation movie, it doesn’t fit the formula closely enough. Judged as a fun, trashy action flick, it’s a good laugh.

But I can’t help but think that, if the series’ drop-off in quality had continued into a fourth movie, audiences would’ve had to be paid to go see it. 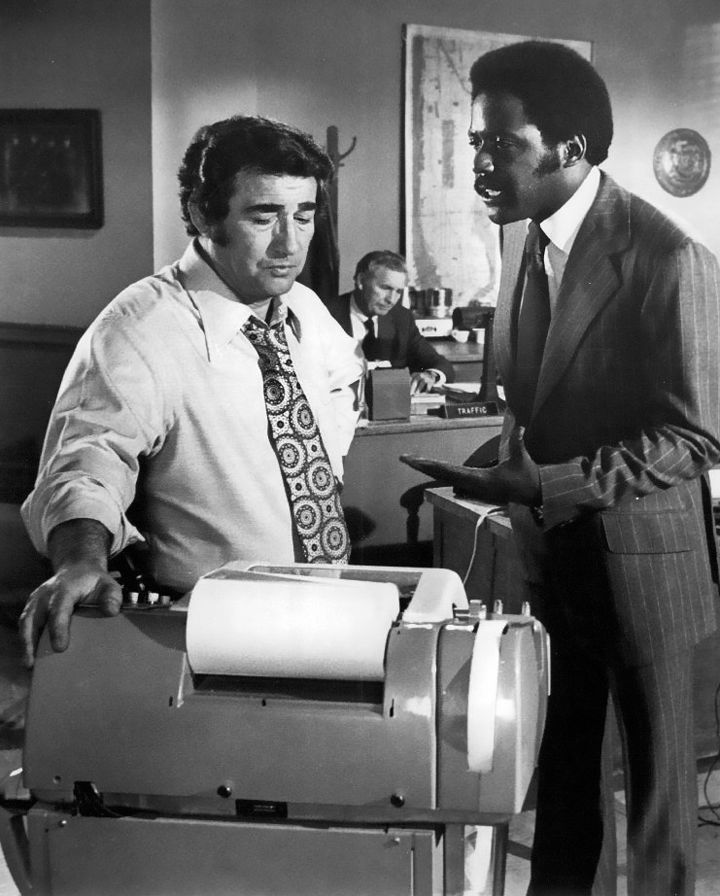 There was a Shaft TV series, made in 1973 after Shaft In Africa. It consisted of 7 90-minute telemovies. According to The A.V. Club, "Roundtree was the first black lead of a regular prime-time detective show".

The series was viewed with little favour by Shaft's followers because of the way it emasculated the Brother Man: the producers believed that predominantly white TV viewers wouldn't want to watch a show about a militant black man, so they made him (they thought) more palatable. Translation: less aggressive, less in-your-face black; and consequently, less Shaft.

The complete series was released on DVD in 2011, and you can buy it from Warner Bros.

YouTube has a preview of the fourth episode 'The Kidnapping': http://youtu.be/iv4YbPiRjMw.